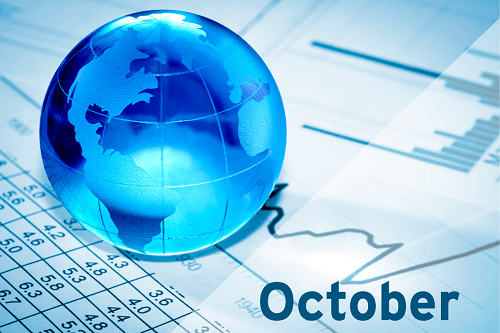 A Tale of Two Cities

With another month and two interest rate cuts under our belts, the U.S. economy looks no less uncertain. Economic indicators appear to be diverging and trade tensions have escalated instead of settled, all while the global growth picture is dimming. Currently, investors are looking toward the October FOMC meeting for another cut though it is far from certain whether the Fed will cut again this year and if so, how many more times.

U.S. manufacturing, as measured by the Institute for Supply Management (ISM) Purchasing Manager’s Index (PMI) continued lower into contraction territory with a reading of 47.8, the lowest reading since June 2009. It is no secret that U.S. manufacturing has been hit hard by the U.S.-China trade war, but the ISM Non-Manufacturing Service NMI is also showing signs of weakness having registered its lowest reading in three years albeit still expansionary.

Contrast this with recent U.S. employment data. The unemployment rate in September hit 3.5%, the lowest level in 50 years. Non-farm payrolls and wage growth were soft but still showed significant hiring and a tight job market. Inflation remains below the Fed’s 2.00% target with an August core PCE value of 1.7%. With these divergent economic indicators, one has to ask, where do we go from here?

The market has already priced in an October interest rate cut and recent headlines suggest that principal level trade talks between the U.S. and China will not yield any material agreements. Manufacturing is weak but by all measures, the U.S. consumer appears to be strong. Considering consumer spending accounts for approximately 70% of growth in GDP, the main concern is whether the uncertainty in the economy will lead Americans to spend less.

Data unaudited. Information is obtained from third party sources that may or may not be verified. Many factors affect performance including changes in market conditions and interest rates and in response to other economic, political, or financial developments. All comments and discussions presented are purely based on opinion and assumptions, not fact. These assumptions may or may not be correct based on foreseen and unforeseen events. The information presented should not be used in making any investment decisions. This material is not a recommendation to buy, sell, implement, or change any securities or investment strategy, function, or process. Any financial and/or investment decision should be made only after considerable research, consideration, and involvement with an experienced professional engaged for the specific purpose. Past performance is not an indication of future performance. Any financial and/or investment decision may incur losses.